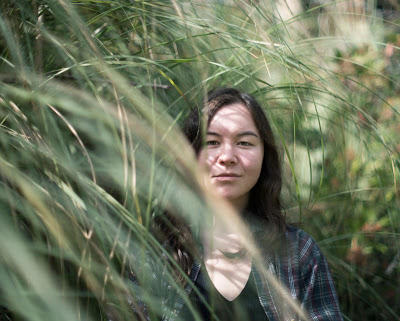 Aus Anlass ihrer neuen Tour, die sie auch in unsere Gefilde bringt, und einer fabelhaften EP im vergangenen Jahr hat der Haubentaucher Maria Maita-Keppeler interviewt.
Ihr neues Video erscheint am 2. 2. und wird im österreichischen Teil des Interwebs als erstes auf unserem Portal zu sehen sein. Und zwar hier: Link zum Video Danke an Rola Music für diese Gelegenheit.
Mehr Infos zu Maita gibt es hier: www.maitamusic.com
Maria, you are living in Portland. Why is this city so attractive for the independent music scene? What aspect of the city do you like especially?
Maita: I was born in Eugene, OR, just two hours away, and Oregon has been my home for my entire life. It was natural for me to move to Portland, and it wasn’t until after I arrived that I discovered how amazing the music scene is. The Scene in Portland is very small considering the originality and creativity that comes out of the city. This small size helps us create more intimate connections within our community. I feel as musicians – especially as the city becomes more expensive and more difficult for artists to live in – we truly want to help one another succeed. We are all in it together. On any night of the week we can see shows that our friends or friends of our friends are playing, and feel happy to support them.
What was the most important thing you learned while working as a waitress in a Japanese restaurant?
Maita: Being in the service industry anywhere I think teaches a valuable lesson (one that everyone should experience). It is a job that requires you to obey the commands of not only your bosses, but every single one of your customers. My restaurant was very traditional, and politeness was the number one requirement. Even if I knew the customer was wrong, I had to serve them as if they were right. This is a powerful lesson to learn – how to put aside your own ego or anger or frustration. It is a valuable thing to have as an artist I think as well – it keeps you grounded, focussed. I might be on tour for two weeks playing shows on a stage and then the next day I’m cleaning toilets and apologizing to businessmen who ordered the wrong thing. It is very humbling. At the same time nearly everyone eats at restaurants several times a week, and it’s important to develop a sense of empathy for people in the service industry if you’re going to be on the receiving end of it for your entire life.
Have you been in Austria before?
Maita: Yes, this will be my fourth time touring in Europe. I’ve done a lot of touring with my partner’s project, The American West, and opened for several of the shows.
Your EP last year was so great, we can’t wait for a new album. When will it be published?
Maita: Thank you very much! We are still putting finishing touches on the full length, so it will be released probably later in 2018.
Your friend, producer and mentor Matthew Zeltzer calls his own style „post-apocalyptic doom folk… sort of“. How would you describe your music in a few words?
Maita: I would call Matthew Zeltzer more my boyfriend, band-mate, co-producer (we are producing the next album together). I suppose I would call my music visceral indie-folk.
Foto: Anna Larina