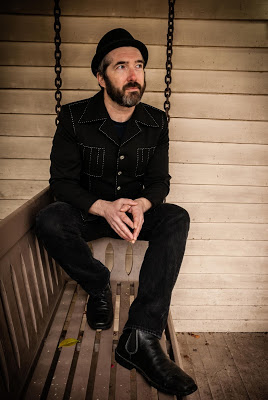 Haubentaucher: Portland, Oregon, is called Rose City or Beertown, says Wikipedia. What’s the element that’s more important in your lyrics and your music: Roses („she’s going to want you“) or Beer („better off alone“)?
Sam Densmore: Although I don’t sing about beer so much, it’s probably more of a lifestyle influence and therefore and influence in my writing than roses!

Portland is (or was?) an important meeting point for many alternative/indie musicians. How’s the situation today in the town concerning bands and gigs?
SD: I’ve been in Portland for 12 years now. So I’ve seen a lot of people in the music scene come and go. Not many acts find financial success and are able to sustain it. That said, there are a lot of musicians here and it’s a fun place to live for now. I see it becoming kind of a cafeteria for tech workers in the future. Portlands losing some of its old soul – condos replacing venues, karaoke replacing live music.

On your Facebook fanpage I found the following people marked as influential:
Michael Stipe, Mtn. Goats, Elliot Smith, Cat Stevens, David Bowie, Neil Young and John Lennon.
If you could play a concert with only of them (ever alive or in heaven): who would it be?
SD: Well I’ve never thought about this … probably Michael Stipe. He seems like he’d be a genuine nice guy and an interesting conversationalist backstage.

What was the first Longplayer you bought for yourself? And what was the last record you bought?
SD: The 1st LP was ‚Men At Work , Business as usual‘. I had the ‚Down Under‘ 45 and leveled up! The last album I bought was Tame Impala – Currents. Kevin Parker is a genius. I also really love listening Unknown Mortal Orchestra because they’re strange and fun.

Your album is called „Heavy Mellow Selections 2010-2017“ – did you really work for 7 years on the record?
SD: Yes and No…“Heavy Mellow“ is a compilation of tracks from my various EP releases since 2010.

There are two songs „It’s all been said“ and „radio silence“ that seem to be tired of blabla – but how important is PR and social media and indie radio for a musician that is not supported by a big record company?
SD: I think PR  and radio play a roll; they’re indispensable on a tour like this. But honestly, I have so little money to invest that they’re not career make it or break it kind of things for me yet. I’m a DIY vagabond hustler folk singer at the end of the day, not a pop star. I’m touring in a fiat 500. Trying to compete with big time label funded artists is kind of like showing up to a gunfight with a pocket knife. Social media and the ability to utilize the internet over physical product save me a lot of money in mail outs and let me readily communicate with listeners, so there’s that. ‚It’s all been said‘ is about being solicited all the time. Someone is always trying to sell you something. ‚Radio Silence‘ is about a girl not returning my calls!

Portland has a rather liberal image. How’s the city living these days with all the Trumpism?
SD: It’s become an angrier town. Prior to Trump it was more of a „Unicorns and Rainbows“ kind of vibe in Portland. I mean the annual naked bike ride is actually a protest. I think people are scared that some of their personal freedoms will be taken away during Trumps tenure. He’s the worst, but we hope for the best nonetheless.